Twelve suspects charged with planning terrorist activities in Lebanon, including assassinations, have been in contact with members of Fatah al-Islam terror group in Roumieh prison, al-Joumhouria daily reported on Thursday.The newspaper said that analysis of the so-called telecommunications data revealed that the members of the network had contacted several Fatah al-Islam inmates in the prison.The examination of the calls is ongoing to know the connection between the two sides, it said.The State Commissioner to the Military Court, Judge Saqr Saqr charged on Wednesday the 12 suspects, including a Lebanese and 2 Syrians who are in custody, with plotting terrorist activities and forming an armed gang to carry out terrorist operations.The charges include buying arms, rockets and bombs to plant them throughout Lebanese territories, and plotting assassinations against personalities in northern Lebanon who back the Syrian regime.
The suspects were also planning to booby-trap vehicles.Security and judicial sources told al-Joumhouria that two personalities from the Syrian opposition were on the assassination list of the 12-member network, in addition to several Sunni clergymen in the northern city of Tripoli who are supporters of the regime in Syria.The daily identified the clergymen as Bilal Shaaban and his brother, in addition to another Sunni man – Kamal Kheir, who heads a political association and a charity in northern Lebanon.
--------------------------------------------------------------- 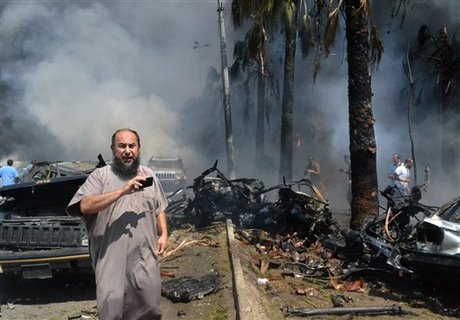 General Security Busts Terror Cell Plotting 'Bombings, Assassinations'
The General Directorate of General Security on Tuesday announced dismantling a “terrorist cell” that was plotting assassinations and bombings in several Lebanese regions.
“Three people of Lebanese and Syrian nationalities have been arrested on charges of belonging to a terrorist cell that was plotting acts of sabotage across Lebanon through bomb attacks and assassination operations,” a General Security statement said.“The detainees were interrogated and referred to the military judiciary together with the seized material, which include explosives, communication devices and silenced weapons,” it added.The directorate stressed that it “will not hesitate to pursue terrorist groups, subversive gangs and illegal emigration networks -- in coordination with the rest of the security agencies – in order to preserve the safety of citizens and the security and stability of the country.”NNA later said two of those arrested were Syrians and a third was Lebanese.The announcement comes after a wave of arrests by the various security services in the wake of four deadly bombings that rocked Lebanon – two in Beirut's southern suburbs and two in Tripoli.
Posted by Nysoulcontrolla aka Ali at 9:33 AM