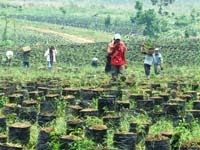 Monocultures of African, or oil palm, whose oil is used to produce a variety of products ranging from cosmetics to biodiesel, bring massive violence and destruction of biodiversity, as the cases of Colombia and Honduras demonstrate. "Violence is an additive to African palm oil or biodiesel," stated the labor organization Rel-UITA. "Environmental degradation, repression of indigenous and campesino communities, and union-busting are some of the footprints that mark the violent identity of the industrial cultivation of the African palm."

Recently 185 of the 200 workers at the palm plantation Palo Alto in Colombia chose to join a union, and were crushed by the bullets of mercenaries. "They opened fire with their faces uncovered, brazenly defiant with the arrogance of those who know that in Colombia impunity nourishes the use of weapons and that it's open season on union members all year long." In 2009, 37 union leaders were assassinated in Colombia. That year, seven of every 10 union members murdered in the world were Colombians.Workers' demands include payment of salaries, bonuses, severance pay, interest on severance pay, family subsidies, and seven years' worth of social security premiums.

"These modern slaves earn an average of (U.S.) $230 dollars, some $30 below the minimum salary. According to the Central Unitaria de Trabajadores, a labor federation, in Colombia you need two minimum salaries to keep a family from dying of hunger," Rel-UITA charged. "It is very difficult to understand how in these feudal work conditions which are accompanied, in addition, by extreme violence, the development of the African Palm would favor progress for people or their quality of life, as President Alvaro Uribe says it will.

The only thing the African palm delivers in Colombia and the rest of the world from the top down is violence and poverty.""There is no crop which has displaced more campesinos in Colombia than the African palm. It is the 'napalm' of Plan Colombia: burning the forest, torching the people ceaselessly, and with full legitimization … Uribe wants Colombia to be 'the Saudi Arabia of biodiesel' in 2020. We can imagine it: a huge desert, an oligarchic monarchy, and a multimillion dollar marketing operation calling for the use of Colombian 'bio-combustibles' to save the planet."

Posted by Nysoulcontrolla aka Ali at 6:59 AM