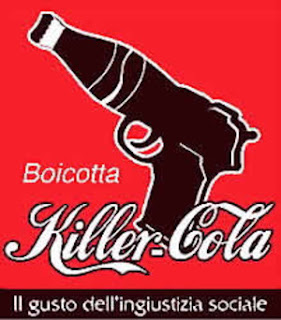 Paez said 4000 unionists have been murdered in Colombia in 28 years. “Last year, 47 unionists were killed, 48 the year before. Union leaders need armed guards, bulletproof cars, camera surveillance and bulletproof windows on their offices. “They lose the possibility of a normal family life.”“The campaign demands Coca Cola compensate the victims, since they have benefitted from the crimes in Colombia”, Paez explained.

Despite the many murders of unionists at its plants, Coke tries to cry poor to justify not compensating victims of anti-union violence. However, The Coca Cola Case explains Coke pays US$2.6 million for a single 30 second advertisement during the US Superbowl.Paez said: “We are campaigning for a boycott — if you love life, don’t drink Coke. We want to see Coke expelled from schools, sporting complexes, cultural centres and community spaces.”“All natural resources [in Colombia] are in the hands of multinationals”, Paez said.

“Seven [US-run] military bases have been installed in the country to assist the multinationals. The US soldiers can come and go. “This is a problem not only for Colombia’s sovereignty, but also for the stability of the continent. We believe all this militarisation is to guard the interests of the US in South American countries.”In contrast to the multinationals, Paez said: “Our demands are for democracy, sovereignty, family and well-being. The multinationals finance the same wars, benefit from the same conflicts, support the same politics. “We need to recognise the common struggle of exploited communities globally, and link these struggles to fight the system of multinationals.”

Posted by Nysoulcontrolla aka Ali at 7:19 AM