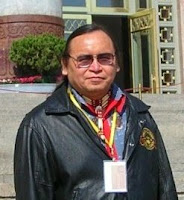 Returning from Iran, Terrance Nelson says Harper is the new Crusader http://bsnorrell.blogspot.com/2012/10/returning-from-iran-terrance-nelson.html
"I will be the target but the Chiefs must get stronger if they want real change," former Chief of Roseau River Ojibwe Terrance Nelson. Chief Fox,The meetings you will have with Chiefs will be significant.The anger of the people is real. Cuts and the lack of any real progress on our right to a share of our own resource wealth is something that must be addressed.What I ask Canadians is how many Iranians are you prepared to kill. Are you prepared to kill 100,000, 300,000, 500,000, a million, three million or ten million. How much blood are ýou willing to have on your hands. The West is ready to kill like the Crusaders. When seven of us indigenous people went to Iraq in 1998, we took 25 hours of video, broadcast quality. Trouble was, no one in the west cared. It was prior to 9-11 and we had not yet gone into the second war against Iraq.We failed in Iraq. We were never able to convince people that the Iraqi were human beings or that the Iraqi children felt the same pain as our own children. If we fail in Iran, there will be war. Harper is the new Crusader. He believes in nothing but his own values and like the Americans during the Vietnam war, he believes in his right to impose Crusader values on the Iranians.How we can believe that we have the right to go to some other peoples country. Canadians impose their belief by killing other people.It is simply Crusader mentality. Shutting Embassies and closing down dialogue and diplomacy is the road to war. The Christians today are the same as the Crusaders, they are right and no one can tell them any different. There is no room for debate, no room for questioning the right of the Crusader.Trouble is that the Crusader will lose again and this time, it will affect every Canadian and American as this new war will collapse the United States economy. I will be the target but the Chiefs must get stronger if they want real change. Tell them not to settle for trinkets or else they condemn their people to more of the same for decades to come.
[ED NOTE;ALSO SEE... NATIVE INDIGENOUS LEADER IN IRAN ... - THENAKEDFACTS  EXPLOSIVE,FIRST NATIONS AND IRAN TO ... - THENAKEDFACTS  Raphael Patai — The Jewish Zionist intellectual... - THENAKEDFACTS
Posted by Nysoulcontrolla aka Ali at 6:25 AM