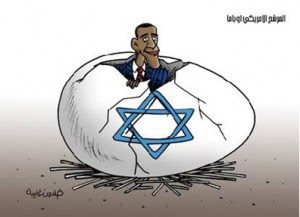 Obama and 'the Jewish lobby of one' http://tvnewslies.org/tvnl/index.php/news/editorials/18992-obama-and-the-jewish-lobby-of-one.html

Among the most durable pieces of conventional wisdom circulating in Washington these days is that President Obama would never risk a confrontation with Prime Minister Benjamin Netanyahu (when he comes to town in May) out of fear of angering Israel's supporters in America a year before the U.S. presidential election.The notion that domestic politics and the pro-Israel community hold the president's Middle East policy hostage seems to bind Washington like a hard-and-fast political law of gravity. The only problem is it's dead wrong and dangerous.

Posted by Nysoulcontrolla aka Ali at 2:51 PM