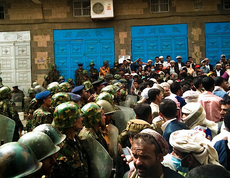 Fifteen more people have been killed in Yemen hours after the EU endorsed a plan which offers immunity from prosecution to President Ali Abdallah Saleh.Saleh forces shot dead 12 protesters and injured over 100 during violence in the capital Sanaa on Wednesday afternoon (27 April). Three more people, including two policemen, died in fighting in the southern tows of Aden and Abyan. The developments bring the death count since recent troubles began to over 120. The clashes came hours after EU foreign affairs chief Catherine Ashton at midday Brussels time welcomed a power-sharing proposal put together by the Gulf Co-operation Council (GCC)."I would like to thank the GCC for its hard work towards securing political agreement for transition in Yemen. I believe that the GCC initiative represents the best chance for Yemen to address the economic, social and security challenges ahead, and to avoid escalation of violence," the Ashton statement said.

Posted by Nysoulcontrolla aka Ali at 4:31 AM