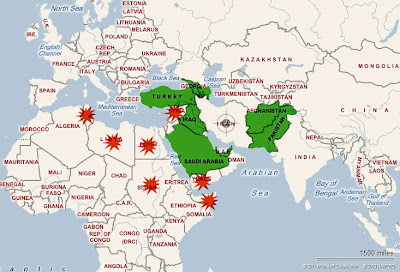 Regime change in Syria was a foregone conclusion as early as 1991. General Wesley Clark in a 2007 speech in California relayed a 1991 conversation between himself and then Under Secretary of Defense Paul Wolfowitz. Wolfowitz indicated that America had 5-10 years to clean up old Soviet "client regimes," namely Syria, Iran, and Iraq, before the next super power rose up to challenge western hegemony. The "next super power" includes ironically Russia, recovering from the treasonous attempted sellout by oligarchs like Mikhail Khodorkovsky, and of course a rising China.

Syria is not only a defiant nation unwilling to participate in "globalization," it is also an integral part of both Iran's and Russia's growing counterbalance throughout the region, in direct contrast to Western hegemony. The Syrian port city of Tartus is being renovated and is set to host heavy Russian warships in a bid to establish a significant presence in the Mediterranean.

This would counteract NATO's expansion along Russia's borders as well as keep in check Western fleets north of the Suez.Syria has long served this purpose, with the Tartus facility having originally been opened in 1971 through an agreement with the Soviets. When Paul Wolfowitz was referring to Soviet "client regimes" in his 1991 conversation with Wesley Clark, this sort of challenge to Western hegemony was what he was referring to.

Posted by Nysoulcontrolla aka Ali at 3:08 AM