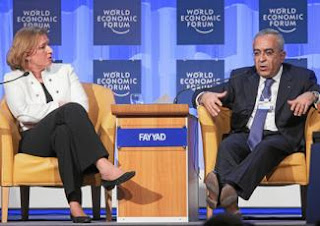 After Tunisia and Egypt: Palestinian Neoliberalism at the Cross-roads http://www.jadaliyya.com/pages/index/904/after-tunisia-and-egypt_palestinian-neoliberalism-

Curiously however, just at the moment when neoliberalism is being rejected by widening popular movements in the region and by developments elsewhere in the global economy, the Palestinian Authority (PA) is stepping up its neoliberal state-building program entitled ‘Ending the Occupation, Establishing the State’. The program was launched by PA Prime Minister Salam Fayyad in 2009 amidst unprecedented internecine political divisions and a historic crisis of legitimacy, indeed survival, of the national liberation movement. While it promises to build ‘good governance’ institutions to garner local and international support for the PA’s statehood plan, a more critical reading reveals that the PA has embarked on a path that seems to be trading off national liberation for neoliberalism.

Posted by Nysoulcontrolla aka Ali at 6:06 AM