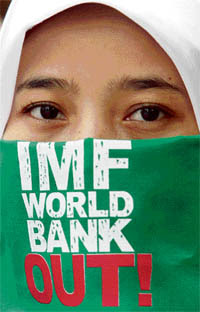 This article argues, however, that a critique of these financial packages needs to be seen as much more than just a further illustration of Western hypocrisy. The plethora of aid and investment initiatives advanced by the leading powers in recent days represents a conscious attempt to consolidate and reinforce the power of Egypt’s dominant class in the face of the ongoing popular mobilisations. They are part of, in other words, a sustained effort to restrain the revolution within the bounds of an "orderly transition" –to borrow the perspicacious phrase that the US government repeatedly used following the ousting of Mubarak.

At the core of this financial intervention in Egypt is an attempt to accelerate the neoliberal program that was pursued by the Mubarak regime. The IFI financial packages ostensibly promote measures such as "employment creation", "infrastructure expansion" and other seemingly laudable goals, but, in reality, these are premised upon the classic neoliberal policies of privatization, deregulation and opening to foreign investment.Despite the claims of democratic transition, the institutions of the Egyptian state are being refashioned within this neoliberal drive as an enabling mechanism of the market.

Egypt is, in many ways, shaping up as the perfect laboratory of the so-called post-Washington consensus, in which a liberal-sounding "pro-poor" rhetoric – principally linked to the discourse of democratisation – is used to deepen the neoliberal trajectory of the Mubarak era. If successful, the likely outcome of this – particularly in the face of heightened political mobilisation and the unfulfilled expectations of the Egyptian people – is a society that at a superficial level takes some limited appearances of the form of liberal democracy but, in actuality, remains a highly authoritarian neoliberal state dominated by an alliance of the military and business elites.

Posted by Nysoulcontrolla aka Ali at 5:46 AM