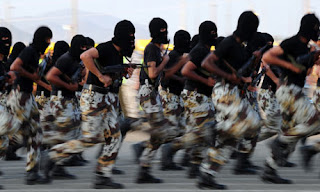 Britain is training Saudi Arabia's national guard -- the elite security force deployed during the recent protests in Bahrain -- in public order enforcement measures and the use of sniper rifles. The revelation has outraged human rights groups, which point out that the Foreign Office recognizes that the kingdom's human rights record is “a major concern”.In response to questions made under the Freedom of Information Act, the Ministry of Defense has confirmed that British personnel regularly run courses for the national guard in “weapons,

fieldcraft and general military skills training, as well as incident handling, bomb disposal, search, public order and sniper training”. The courses are organized through the British Military Mission to the Saudi Arabian National Guard, an obscure unit that consists of 11 British army personnel under the command of a brigadier. The MoD response, obtained on Saturday by the Observer, reveals that Britain sends up to 20 training teams to the kingdom a year. Saudi Arabia pays for “all BMM personnel, as well as support costs such as accommodation and transport”.

Posted by Nysoulcontrolla aka Ali at 4:57 AM