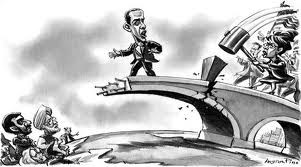 Welcome to the Violent World of Mr. Hopey Changey by John Pilger http://www.johnpilger.com/articles/welcome-to-the-violent-world-of-mr-hopey-changey

The language of colonialism may have been modified; the spirit and the hypocrisy are unchanged. A new imperial phase is unfolding in direct response to the Arab uprising that began in January and has shocked Washington and Europe, causing an Eden-style panic. The loss of the Egyptian tyrant Mubarak was grievous, though not irretrievable; an American-backed counter-revolution is under way as the military regime in Cairo is seduced with new bribes and power shifting from the street to political groups that did not initiate the revolution. The western aim, as ever, is to stop authentic democracy and reclaim control.

Posted by Nysoulcontrolla aka Ali at 6:53 AM