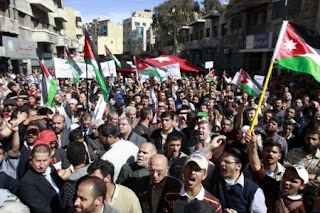 Protesters in Jordan have once again poured into the streets, calling on the Jordanian government to cut ties with Israel and demanded the fall of the government.Furious over their country’s peace treaty with Tel Aviv, hundreds of protesters burnt an Israeli flag after Friday prayers in Jordan’s Tafileh province, AFP reported. The demonstrators also slammed “racist and provocative” remarks by Israeli Knesset member Arye Eldad.Last week, Eldad urged Jordanian King Abdullah II to set up a Palestinian state in his country instead of in the West Bank and the Gaza Strip.

Jordan’s 120-member Lower House also issued a statement on Thursday, condemning Eldad as a racist, provocative radical. “We call on the government to take a firm position against these harmful statements to Jordan and its people,” the statement read. It added that Jordan will never stop calling for the creation of an independent Palestinian state on Palestinian national soil with al-Quds (Jerusalem) as its capital.

Meanwhile, the protest group calling itself “The Youth of Tafileh” demanded the resignation of Jordanian Prime Minister Marouf Bakhit’s government and the dissolution of the Lower House of the parliament. The group accused Bakhit of having no intention of implementing reforms in Jordan. The protesters chanted slogans such as “We will not be silent and continue to expose corruption,” and “Destiny will help the people who want to survive.” A similar rally was staged in the Jordanian city of Ma’an after Friday prayers.Since January, Jordan has been facing a protest movement demanding political and economic reforms in the Middle Eastern country, and an end to corruption.

In response, King Abdullah was forced to dismiss his cabinet and Prime Minister Samir Zaid al-Rifai in February in an attempt to curb the spate of protests.He then asked Marouf al-Bakhit, a former army general, to form a new cabinet as soon as possible.Amidst intense calls for the limitation of his exclusive powers, the Jordanian monarch also created a commission on April 26, to propose constitutional reforms.The series of concessions managed to quell the raging protests across the country to some extent. However, analysts attribute the drop in the number of protests to a wait-and-see approach by pro-reform groups and a couple of violent incidents during the three-month-long demonstrations, which left at least two people killed and hundreds of others injured.

[Note to my brother Carlos,for years we talked about this coming to fruition in PL6...the puppet regimes,are finished,they will not survive,and king abdullahs support for destabilization of Syria has only worked against him,as his regime hangs by a thread,keep in mind saud monarchy has recently gave billions to its friends, Jordan included, to spread money in order to keep citizens in these countries from rising up,and lo and behold,didnt work,one either because that money was pocketted,or two it wasnt even handed out(maybe just pr stunt for west and region via aljafraud-era)),or it was handed out(to cronies)and people are still out for their heads,i love it,the more they secretly plan,the more it works against them...''la ilaha illa Allah''

Posted by Nysoulcontrolla aka Ali at 6:30 AM