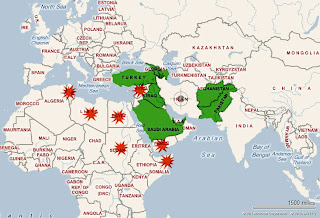 Pakistani Politician Urges Islamabad to Withdraw from US War on Terrorism http://english.farsnews.com/newstext.php?nn=9003070479

A senior Pakistani politician pointed to the heavy costs of Pakistan's participation in the US alleged war on terrorism, and called on his country's officials to step out of the costly war."This is not a war on terrorism, but it is a war waged by the US and its allies such as France, India, Israel and Britain against Pakistan and its nuclear program," Former president of Jamaat-e-Islami Pakistan (Pakistan Islamic Community) Qazi Hossein Ahmad told FNA in Islamabad on Saturday. He called on the Pakistani officials to take the necessary political decisions to defuse the US plots. "The US plot is now clear and it will be too late if Pakistani rulers do not decide to withdraw from the United States' alleged counter-terrorism plans now," Hossein Ahmad stated.

He said that confrontation with terrorism has claimed the lives of 35,000 Pakistani citizens and soldiers and inflicted over $70 billion of damage on the country. The politician added that the financial assistance that has already been provided to Islamabad by the US cannot make up for just one percent of the total costs inflicted on Pakistan. He further said that recent remarks by NATO officials on Pakistan's nuclear security unveil the United States' inauspicious plots against Pakistan. On Tuesday, NATO Secretary-General Anders Fogh Rasmussen said that security of Pakistan's nuclear weapons is a matter of concern.

Posted by Nysoulcontrolla aka Ali at 4:40 AM