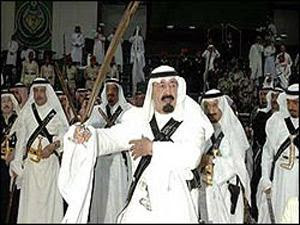 Saudi Arabia is flexing its financial and diplomatic might across the Middle East in a wide-ranging bid to contain the tide of change, shield other monarchies from popular discontent and avert the overthrow of any more leaders struggling to calm turbulent nations. From Egypt, where the Saudis dispensed $4 billion in aid last week to shore up the ruling military council, to Yemen, where it is trying to ease out the president, to the kingdoms of Jordan and Morocco, which it has invited to join a union of Persian Gulf monarchies,

Saudi Arabia is scrambling to forestall more radical change and block Iran’s influence. The kingdom is aggressively emphasizing the relative stability of monarchies, part of an effort to avert any drastic shift from the authoritarian model, which would generate uncomfortable questions about the pace of political and social change at home. Saudi Arabia’s proposal to include Jordan and Morocco in the six-member Persian Gulf Cooperation Council — which authorized the Saudis to send in troops to quell a largely Shiite Muslim rebellion in the Sunni Muslim monarchy of Bahrain — is intended to create a kind of “Club of Kings.”

“We’re sending a message that monarchies are not where this is happening,” Prince Waleed bin Talal al-Saud, a businessman and high-profile member of the habitually reticent royal family, referring to the unrest.“We are not trying to get our way by force, but to safeguard our interests.” The range of the Saudi intervention is extraordinary as the unrest pushes Riyadh’s hand to forge what some commentators, in Egypt and elsewhere, brand a “counterrevolution.” Some Saudi and foreign analysts find the term too sweeping for the steps the Saudis have actually taken, though they appear unparalleled in the region and beyond as the kingdom reaches out to ally with non-Arab Muslim states as well.

“I am sure that the Saudis do not like this revolutionary wave — they were really scared,” said Khalid Dakhil, a Saudi political analyst and columnist. “But they are realistic here.”

[THEY ARE FINISHED,THEIR PLANS ARE ABOUT AS FUTILE AS  THEIR ATTEMPTS TO MASK THEMSELVES AS MUSLIMS WHILE WORKING WITH IMPERIAL WESTERN POWERS THAT GIVE THEM THEIR POWER TO REMAIN ENTHRONED...

Posted by Nysoulcontrolla aka Ali at 8:20 AM