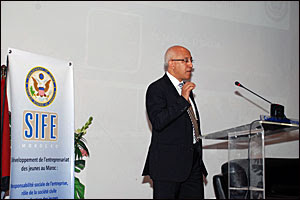 Moroccan business leaders and young entrepreneurs gathered in Rabat on Thursday (May 12th) to focus on youth leadership development and expanding communication between enterprises and civil society.The seminar was jointly sponsored by Students in Free Enterprise (SIFE) Morocco and the US Embassy in Rabat. "We believe that young people are the pillar of the future, and if we don't move now to help them, that will be wrong against them,"

SIFE Morocco Chairman Majid El Ghaib said. "Our aim is to create a power to make proposals and to have strong presence in the first youth debate that will be held at the end of this May." SIFE is an international non-profit that works with students and businesses to develop entrepreneurship skills in young people in order to make them competitive in the global market economy.

El Ghaib added that the Rabat project "logically started with the initiative of US President Barack Obama. The idea is to have a presence in that dynamism of the entrepreneurial Arab Maghreb." "I believe that SIFE is the most important tool for working for the interest of young people in a scientific and pragmatic way," said US Ambassador to Morocco Samuel Kaplan. "The Unites States hopes that all those who have merit in Morocco will succeed. In other words, we hope that young people will succeed in imposing themselves through their entrepreneurship ideas and capabilities," the ambassador added.

[THESE ARE JUST A FEW ON BOARD OF DIRECTORS...US BRING NEOLIBERAL OPPORTUNISM TO MORROCO,INSTEAD OF SUSPENDING FTA,AND ENDING MILITARY SUPPORT FOR THE CLIENT REGIME...DICTATORSHIP

Posted by Nysoulcontrolla aka Ali at 9:33 AM

Radwan Ziadeh is 'connected', but, not to Syria.

I will keep a watch for that name.